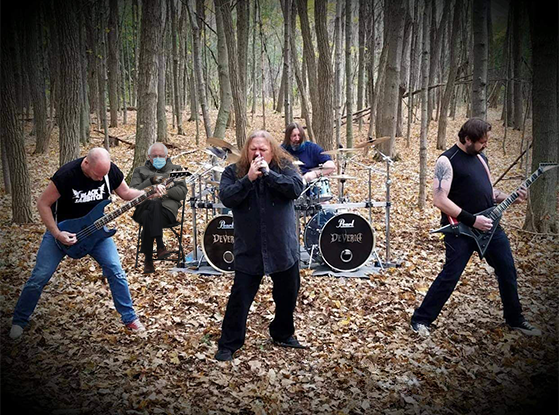 In the beginning of 2020, Deveria was in the initial stages of recording an LP. Then the coronavirus shutdown brought activities for one of the area’s busiest metal acts screeching to a halt. On top of that, Charles Woodard’s “day job”  was as a cardiac nurse for St. Peter’s Hospital and Albany Associates in Cardiology.

“When COVID-19 started our lives had been completely changed, especially in my profession,” Woodard said in an email. “Every day was a challenge for me, and it still is. In my profession I am there to help people, but it’s a struggle daily fighting something that you cannot see, trying to protect yourself and not bring it home to my wife and kids. It was causing so many deaths in the world, so my stress and anxiety level went through the roof.”

It was with Deveria that Woodard found the outlet he needed. Now, the band has released its first full-length LP, “Suicide Forest.” In doing so, he was able to fulfill a childhood ambition.

“Ever since I was 12 years old, I always wanted to write my own songs after listening to bands like AC/DC, Black Sabbath, April Wine,” Woodard wrote. “I believe Deveria developed its sound from all types of music genres growing up in the 80s through today’s listening to all varieties of rock, heavy metal, thrash and progressive metal.

“We started recording our new album just before the outbreak started. So it put us out of commission for at least six months I believe, before we were able to get back in the studio and start up again,” he added. “But I believe if it was not for the music and the band, I’m not sure how I would have kept myself together to deal with my stress and anxiety. Music was my life saver.”

While the pandemic was a major setback for Deveria, this isn’t the first obstacle the group has had to overcome. It released an EP in 2010, but disbanded soon after. In 2018, a revamped and resurgent lineup came screaming for vengeance and brought its Judas Priest, Iron Maiden and Dio-inspired sound to life.

When reforming Deveria, Woodard reconnected with the band’s prior drummer John Suski after several years. To fill in the bass and guitar roles, Woodard and Suski relied on outside connections. Bassist Marvin Veeder taught Woodard’s kids in high school, while guitarist Christian Bivona had previously played with Suski in a cover band.

Work on “Suicide Forest” had come in fits and starts between 2018 and 2020. Bivona came on board during the beginning of the recording to solidify the lineup, helping to foster the ideal creative synergy to complete the album.

“When I joined, the rhythm guitar tracks were completed, so I was initially just composing and recording solos,” said Bivona. “I think I started laying some down in June.  After a few sessions, I figured I could re-record all the rhythm tracks as well, and it worked out better than I could have ever hoped for.”

“I think that one of most difficult parts about making this album from day one was finding the right band members that clicked with the writing style, our ideas and having no attitudes,” noted Woodard. “In the last several years we had a guitarist and bass player change out.  Once we got our new members everything just seemed to come together and fall into place.”

“We started back in winter of 2019, just before COVID-19 completely derailed everything. It caused us to space out our recording sessions over months instead of weeks,” said Suski. “Then there was also the issue with when the studio was available for the final recording and mixings. So, what expected to only take a few months at the most, from recording to having a finished product, took over a year.”

To celebrate the release of “Suicide Forest,” Deveria is performing its first-ever livestream on Friday. In addition to promoting the album, the gig helps and engage the Mohonasen school community where Veeder teaches.

“The Mohon Cares foundation has done an amazing job of taking care of people’s needs during the pandemic,” Veeder wrote. “After talking with some of the people who have been coordinating the efforts of the foundation, they asked if we’d be willing to play a livestream concert event to bring some attention to the foundation and raise awareness for the continued needs of our community.

“They wanted to give us the ability to give the livestream a real concert feeling,” he continued. “We are going to be using the auditorium stage with a full light show.  Students in the Live Production class and the Music Production class will be working the event and helping to give every viewer the full concert experience.”

Bivona noted that Deveria “has been practicing together weekly” to prepare and the band is eager to hit a stage for the first time together in over a year. They hope it’s a precursor to a return to in-person shows.

“With COVID-19 numbers going down, we are hoping that the venues will start to open up again, so we can get back to doing live shows. We have had many lined up that have been canceled and rescheduled for the spring of 2021 through to December,” Woodard said. “We have a new album that we want people to hear and some killer new stage gear to go with our show. We are ready to go full force.”

For more info on Deveria, head to  www.deverianation.com